SpiceJet currently operates an all narrow body fleet of around 109 aircraft consisting of a mix of 737s and Q400 in addition to 2 737 Freighters.  Interestingly, it has 11 fleet subtypes, so much so for fleet simplicity, being a no-frills carrier, which is now morphing into a hybrid carrier. For quite a few seasons, SpiceJet has been requesting for slots at UK airports, and getting them.

Last year, SpiceJet was rumoured to place an order for widebody aircraft. But there was no further development on that front. However, that did not stop SpiceJet from going ahead with planning for take-off to London. In January 2019, we confirmed that SpiceJet had requested slots to operate flights from Amritsar to London Heathrow as well as from Delhi to London Gatwick. In fact they have been requesting slots for more than a year or two. Spicejet had filed to operate a 267 seat premium heavy A330-300 on both the routes. Later in March 2019, we confirmed that SpiceJet had secured slots at Birmingham airport for flights from Amritsar. But none of this materialised as SpiceJet doesn’t operate widebody aircraft.

Well in Winter 2019 season, SpiceJet has requested slots at London Heathrow as well as at Manchester airport. SpiceJet has applied for slots to operate daily flights to both the airports with an A330-300. SpiceJet intends to operate daily flights on the Mumbai – Manchester route. They have been allocated Terminal 2 at Manchester airport and have requested the same slots as Jet Airways have/had for their 5x weekly flight on Mumbai-Manchester route.

SpiceJet’s plan for Mumbai-Manchester flights with an A330-300

Currently, this is the initial phase of slot allocations for winter 2019 and SpiceJet hasn’t secured slots at both the airports yet. Starting wide-body operations requires a lot of planning and getting it correct is crucial.

For start, SpiceJet does not operate widebody aircraft at the moment. There are a lot of second-hand A330s in the market which they can pick up. Ex-Jet Airways A330-200/300 are now stored at Tarbes–Lourdes–Pyrénées Airport and Etihad is storing A330s at Teruel airport. 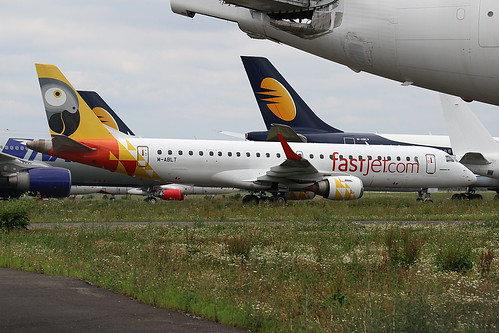 Jet Airways’ Business Class aboard their A330-300

Long haul wide body expansion can make or break carriers. An excellent example is WOW Air which collapsed due to excessive expansion. WOW air’s founder and CEO Skuli Mogensen, went on record to say that their biggest mistake was adding widebody aircraft. IndiGo’s CEO Ronojoy Dutta even explained it perfectly in an interview with CNBC TV18.

And frankly, SpiceJet doesn’t have much cash left. They have invested a lot of money into the expansion they undertook to take advantage of Jet Airways grounding. Taking over around 28 ex-Jet Airways 737s and possibly more in the near future, crew and ground staff, adding new routes both domestic and international and so on, in a short period requires a huge investment.

Plus they do not have a war chest like IndiGo and their finances are not so great having posted a small profit for the past two quarters on the back of a huge loss before it. Well, let’s see if SpiceJet goes ahead with international widebody expansion using Jet Airways A330-300 and crew.

Additionally, while Heathrow continues to be the best airport in London for international arrivals, it is also expensive and a different cost base as compared to the Gatwick/Stansted operations.

IndiGo still has plans for London Instead, IndiGo secured slots at London Stansted airport for Summer 2019 season. IndiGo had filed for operating flights from Delhi and Bengaluru on an A321neo. But even that didn’t materialise. Well, there were a lot of factors, with the ongoing feud between promoters, closure of Pakistan airspace which is now open, grounding of Jet Airways and so-on, there was a lot on their hands.

Even deliveries of A321neo were delayed. As of now, IndiGo operates only 5 A321neo with the last one coming in May 2019. They still have 145 more A321neo on order. But the main reason was that IndiGo was/is having a hard look whether it is the right strategy to operate a narrow body with the current product on this route or not.

We thought IndiGo would place an order for the A321XLR at the Paris Airshow for flights to Europe and Asia but that also didn’t go through.

Ronojoy Dutta mentioned that they are looking at wide-bodies but there is no hurry. Let’s see if IndiGo adds flights to London Stansted with an A321neo or just let the slots expire as usual.

Also, Air India hasn’t applied for any new slots at London Heathrow for winter 2019 according to the initial report. They did secure 3x weekly additional slots in Summer 2019 but they gave it back.

Looks like they have no intentions of adding any new flights and instead let international carriers take advantage of the void created in this market due to the grounding of Jet Airways.

Both British Airways and Virgin Atlantic are adding a new daily flight each on Mumbai – London Heathrow route. Air India did get 50% of Jet Airways’ bilateral rights. But then again they know that no Indian carrier currently operates a wide-body aircraft, apart from them, and they are the only Indian carrier on this route for now.

What are your thoughts on the intentions of Indian carrier for expansion to the UK? Which one would you like to go for UK in a more aggressive fashion?

« Ethiopian Airlines adds flights to Bengaluru from Addis Ababa
Abu Dhabi for less than 24 hours. Thanks Etihad (or not!) »